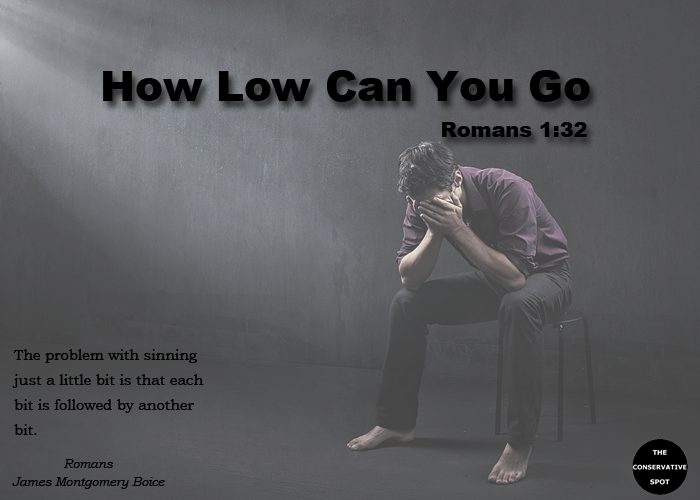 It is the accumulation of these little bits that lead us to having God banished from life’s horizon entirely.

Study of Romans as given by Dr. James Montgomery Boice: Romans 1:32

32Although they know God’s righteous decree that those who do such things deserve death, they not only continue to do these very things but also approve those who practice them.

Why can’t we sin just a little bit? We don’t have to commit the big sins, maybe a few little sins here and there. God forbids all sin, of course, but surely all sins are not equally terrible. It wouldn’t be so bad to dip into sin every now and then, you know, to satisfy the appetite for it. We should know the answer to this simple question from having studied the first chapter of Romans. The problem with sinning just a little bit is that each bit is followed by another bit, which is followed by a little bit more. It is the accumulation of these little bits that lead us to having God banished from life’s horizon entirely. We come to a point where we have ruined everything.

Worse Than the Animals

Is There a Bottom Rung?

Evil as defined by the “Westminster Dictionary of Theological Terms” is that which opposes the will of God. It is both personal and structured oppression that takes shape in societies. It has been defined as the absence of good (Augustine). Paul in previous verses (28-31) lays out 21 different acts of evil that mankind commits. In verse 32 Paul informs us that even though people know what God commands, we continue to do these acts of Evil. We not only know what God’s commands are, but we also know that opposing God brings death. It still doesn’t matter to the sinful man, he continues in his sin. Paul ends chapter 1 of Romans by saying that man not only continues knowingly to do evil acts, they support those who do evil also. In other words, evil people become a cheerleader for those who commit evil. A question is put forth her: What is worse, those who commits the evil acts or those who approve of those who commit evil acts?

Certainly those who commit acts of evil are under the full judgement of God, but those who support and approve evil are a special case. I think about those corrupt governments who approved the use of racial cleansing as justification to kill millions. I think of those leaders of organizations who not only approve of abortion, but also commit such acts of evil. I think of those who made the decision to say it was legal to end the life of innocent children. I think of those who lead the charge to redefine marriage as being between one man and one woman as God had intended. I think of those who approve or lead the charge to legalize sex between children and adults. I think of those who want to advance the idea that abortion should be legal post-birth, sometimes up to 3 months after birth. In most cases those who approve and support evil are found to be in leadership positions, charging the way to help evil flourish. What we see in these people is what happens when God hands them over to their depraved minds, their desire to separate themselves from God. Even when God hands people over to their depraved minds, He is still in control of the evil they commit, using it to bring about good. It’s what the story of Joseph is all about, using evil for good.

No matter how evil man may grow, God is always in control. So it really doesn’t matter “how low one can go”, it is still under the sovereignty of God. As Christians we are to understand that God’s sovereignty is what makes it possible to make order out of a world that seems chaotic at times. It is the reason that Christians are told to find our peace in God and not in this world. This world will only become more evil as the day comes for Christ to return, until then, if you are a Christian, find your hope and peace in God. Pray with, and for, one another. Hold one another up for we are a community of redeemed sinners. Remember, Evil is under the foot of Christ. Christ has his foot on Satan’s neck.