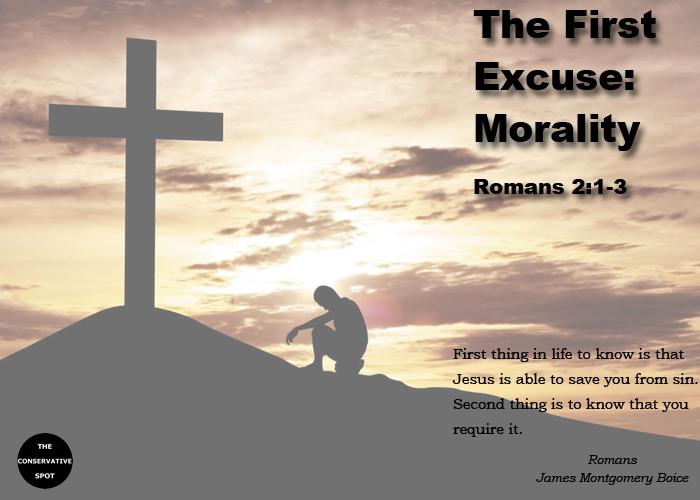 Church discipline should never be used as a weapon to destroy, but should be used as a tool to restore the sinner.

Study of Romans as given by Dr. James Montgomery Boice: Romans 2:1-3

This, at first glance, may seem redundant. In the previous chapter Paul talks about men having no excuse to know God. At the beginning of Chapter 2 Paul seems to repeat himself as he says “You, therefore, have no excuse…” What Paul is doing is continuing to build a case that all persons, no matter what they have done or not done, are under God’s judgement. Even if Paul were being redundant it would be for a reason. Redundancy is often used as a tool to drive home a point, to bring emphasis to an idea. Here Paul uses repetition to dramatize the fact that human beings never seem able to fully admit to their wrongdoing and never tire of making excuses for their bad behavior. People habitually attempt to excuse their wrong behavior.

Condemned by Any Standard

I’d like to make just a passing note in reference to who Paul is speaking to at the beginning of Romans Chapter 2. As mentioned above in the outline there is much disagreement as to whether Paul is addressing Gentiles or Jews in the first 16 verses of Chapter 2. I do agree with Boice that in the end it doesn’t matter who Paul is addressing, the main point remains intact. We should notice a change in language as Paul goes from using “they” in chapter 1 to using “you” in chapter 2. Does this mean Paul when using “they” is referring to the Gentiles and the switch to “you” is addressing the Jews? We know the church in Rome was predominately Gentile, although there were probably a large number of Jewish members. We can also think about the idea that when Paul uses they/them in chapter 1 he is referring to the unsaved as a whole. Paul could be referring to those outside of the church. The switch to using “you” then is an address to those within the church, the saved. We do know one thing is certain, in verse 17 of Chapter 2 Paul does begin to address the Jewish people directly.