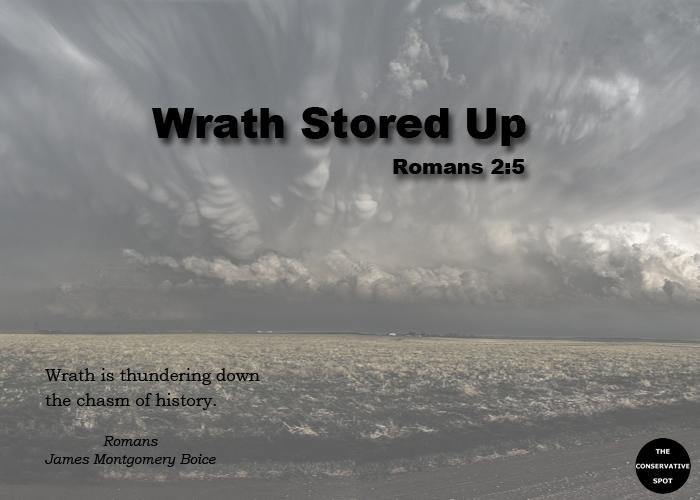 That wrath is thundering down the chasm of history toward the day of final judgment, and one day it must break upon you unless you stand before God in Jesus Christ

Study of Romans as given by Dr. James Montgomery Boice: Romans 2:5

5But because of your stubbornness and your unrepentant heart, you are storing up wrath against yourself for the day of God’s wrath, when his righteous judgment will be revealed.

This is the second time we come to the subject of God’s wrath. While wrath seems out of place for God, we must recognize that it is part of God’s character and we must defend it. We cry out with anger when we read about a heinous crime such as a mass shooting, physical abuse of the weak, and so on. Boice retells a story of a serial killer named Gary Heidnik. The police were informed of this, but were unable to do anything about this until a woman escaped and was able to tell about the crimes of Heidnik. The people were angry at the police for not doing anything and wanted punishment for this evil. We demand justice from our judicial system and want to know why the authorities did not stop this evil. In short we demand justice when evil has been done, yet we don’t think a holy God should be able to punish and have justice. As Boice writes, “…we consider our sins and those of most other people to be excusable—forgetting that in the sight of the holy God they are not much different from those of Gary Heidnik.” Our sins are not measured by our own relative and wavering standards of good and evil, but by God’s absolute and utterly upright criteria

The wrath of God is a perfection of the divine character upon which we need to frequently meditate. First, that our hearts may be duly impressed by God’s detestation of sin…..Secondly, to beget a true fear of our souls for God: “Let us have grace whereby we may serve God acceptably with reverence and godly fear: for our God is a consuming fire” (Heb 12:289-29). We cannot serve him “acceptably” unless there is due “reverence” for His awful Majesty and “godly fear” of His righteous anger;….Thirdly, to draw out our souls in fervent praise for our having been delivered from “the wrath to come” (I Thess 1:10).”

Pink calls for us to not only to think about the wrath of God, but to meditate on it frequently. In these modern days we barely hear preachers from the pulpit speak on this attribute of God, afraid of driving members away. There are some ministers who refuse to speak about the consequences of sin, but only emphasize the positive side of God; love, mercy, grace, etc. While all these attributes are embodied in God, there is also wrath and justice. When ministers preach such a weak theology that only emphasizes the “fluffiness” of God without warning their congregation about the consequences of sin, which is the wrath of God, then he does a terrible disservice to the congregation they are preaching to. God detests sin. When the preacher refuses to ignore this and not warn its congregation, the congregation becomes comfortable in their sin. Soon those members are no different than those outside of the church, and as a result they are no longer immune from the wrath of God. They are under God’s judgement just as we all are, and part of that judgement is God’s wrath.

So what does God’s wrath entail? One part of God’s wrath has to do with His coming judgement. Everyone will be judged according to their sin and will be rewarded according to what he or she has done. (Romans 2: 5-16). Those who seek after Christ and righteousness will be acknowledged and on the basis of Christ’s atonement and merit on their behalf will be awarded that which they seek. The rest will receive a destiny commensurate with the godless way of life they have chosen, and that destiny will come to them on the basis of their own demerit. (J.I. Packer, Concise Theology). Nothing will be hidden, everything about everybody will be exposed. A second part of God’s wrath is the act of punishment for the unrighteous. After judgment comes the sentence, banishment into endless misery.

There are those false teachers out there who would teach that the wrath of God is not real, it is not a part of who God is. These false teachers go against a very real teaching of scripture and in denying this part of God teach a false gospel. There are those preachers who stand behind the pulpit and have vowed to never speak or teach about this aspect of God’s character. Those who remain silent condemn their sheep to Hell as well as themselves. I find that the Old Testament in general is a show of God’s wrath while the New Testament is a show of how to avoid that wrath. Dear brothers and sisters in Christ know that judgment is coming, know that the wrath of God is coming. Are you prepared?