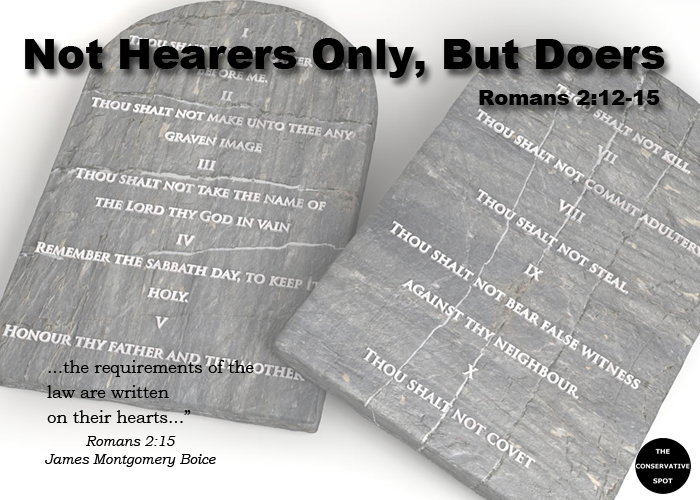 Study of Romans as given by Dr. James Montgomery Boice: Romans 2:12-15

12All who sin apart from the law will also perish apart from the law, and all who sin under the law will be judged by the law. 13For it is not those who hear the law who are righteous in God’s sight, but it is those who obey the law who will be declared righteous. 14(Indeed, when the Gentiles, who do not have the law, do by nature things required by the law, the are a law for themselves, even though they do not have the law, 15since they show that the requirements of the law are written on their hearts, their consciences also bearing witness, and their thoughts now accusing, now even defending them.)

Dr. Boice opens this section up with a stark reality about the “heathen” who has never heard the gospel. At some point in a pastor’s career, or a Christians life they will be asked about the condition of the heathen who has never heard the gospel of Christ. The claim from the person asking the question is often that a person who has never heard the gospel will not be condemned. When we read Romans 2:12-15 we find the answer to that question, and for some it is a difficult answer. The heathen who has never heard of the gospel will be condemned, as Romans 2:12 reads “All who sin apart from the law will also perish apart from the law…” They will not parish for not believing in Jesus, but they will perish for failing to do what they knew they should, even apart from God’s special revelation. We can go all the way back to Romans 1:18 ff to see that God has been revealed to all people through natural revelation and that man is without excuse for knowing about God. Paul brings the Gentiles in as an example of a people who do not have the law, yet they do things in accordance of the law because it is written on their hearts. This is the same for all people. The law is written on our hearts, so that even if we are heathens who have not heard of Christ, we should know what to do. It is the heathen who disregards what is written on their heart, that Romans 2:12 is referring to.

I think the title of this could also be flipped, “Not Doers Only, But Hearers” and still apply. There are some who do a lot of good works and think they are saved but have not really listened to the gospel and what it says about salvation through faith. There are whole denominations who are led astray and believe they are saved because of the “good” things they do, yet they deny numerous foundational doctrines of Christ, God, Holy Spirit, faith, and salvation. Busy bodies, rushing about to do good things in society, but dead in their sins because they deny the deity of Christ, or the many sins committed by man, willing to overlook those sins. Ministers who preach in the pulpit, leading their congregation astray because they only preach a half gospel, never touching on the condemnation that sin brings upon one’s life. It is imperative that as Christians, we not only hear the gospel, but they we put into practice what the gospel says. Our faith and salvation is in internal change of heart, mind and soul. Our faith and salvation, becomes evident by our actions in this world and our obedience to the living God.

God calls us to be both hearers of the word, and active agents of the gospel in this world through obedience to God. That obedience is actively carried out, not only by worshiping with our brothers and sisters, not only by showing benevolence to our brothers and sisters in Christ, but by showing the world, the unsaved, what obedience to God looks like. Let us recognize the horror of sin and the condemnations that it brings by preaching about it in the pulpit. Let us also speak about the forgiveness of those sins through faith in Christ our savior. Let us show we are saved by faith to the world by being first hearers of the word then letting our faith compel us to be doers of the word.