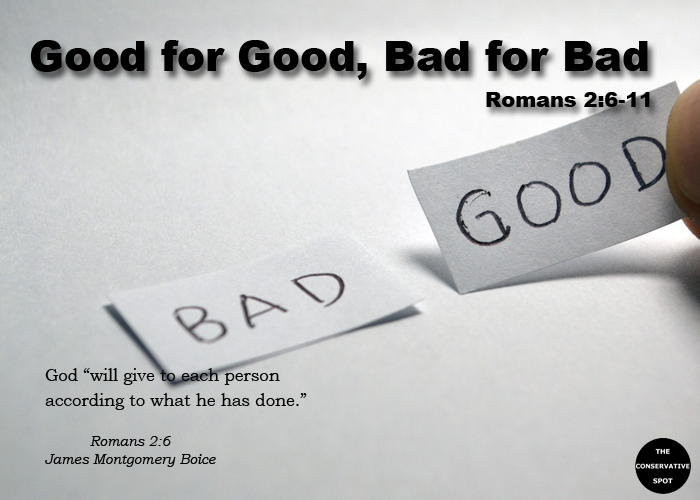 Study of Romans as given by Dr. James Montgomery Boice: Romans 2:6-11

6God “will give to each person according to what he has done.” 7To those who by persistence in doing good seek glory, honor and immortality, he will give eternal life. 8But for those who are self-seeking and who reject the truth and follow evil, there will be wrath and anger. 9There will be trouble and distress for every human being who does evil: first for the Jew, then for the Gentile; 10but glory, honor and peace for everyone who does good: first for the Jew, then for the Gentile. 11For God does not show favortism.

Have you ever been caught in a situation where you were doing something and you know what you were doing is wrong? I have. What is the first things we do? We begin to make excuses for our actions, our behavior. We say, “I didn’t mean to do it” or “But so-and-so did it first.” Or, “You just don’t understand my circumstances.” Maybe we are innocent, but in most cases it is the opposite. Generally speaking, the excuses we make are exactly that, excuses. This is particularly true with our relationship with God. We stand before God accused of repressing the truth and of violating his moral law even as we pass judgement on others for doing the same things, but as soon as we hear the truth we begin to make excuses. Whenever we find ourselves doing this, we need to rediscover the principles of God’s just judgment, which Romans 2 explains. Two principles we need to realize about God’s judgement; 1) God’s judgment is according to truth. 2) God’s judgement is according to our deeds. We cannot plead extenuating circumstances with God, because it is what we do that counts.

Sometimes I get lost in this world, and to be honest it’s easy to get lost. To lose focus on Christ and his eternal kingdom has plagued me my entire walk with Christ. So many distractions this world offers me, and I’m easily moved away from the path that has been set out before me. When this happens, I also notice something else that changes. My desire to be compassionate diminishes, my willingness to give of myself in time and resources seem to disappear. In short, the signs of salvation become less and less noticeable, I no longer seek the eternal kingdom. Any good that I do seems empty, shallow. It seems that way because it is. The good I do is about serving me, it is centered around me, not around my service to Christ. It is an empty, void service to alleviate a guilty conscience. A guilty conscience because I know that I am not walking a path of righteousness. I write about this, because this is the path of the unrighteous, the path that leads to the bad for the bad. If it were not for the saving grace from God, the work of Christ on the cross, I would be lost. Thanks be to God who continues to pursue me in all circumstances. When lost, I believe that my salvation is assured through what I do, a works salvation. When I put my focus back on Christ, I realize that everything I do will never be good enough to gain entrance into the kingdom of Christ. As Paul writes frequently, it is through faith that we are justified, and not of our own works, so that no one can boast (Ephesians 2:8-10). This does not free us from doing good deeds, but instead pushes us to do good deeds for our fellow man because we are a new creation. As my old bible teach said, “we are justified and saved by faith, what we do after gives evidence of that salvation and faith.”

Recently, my focus has not been on Christ, and it shows in my struggles with my faith. It shows when I think that when I do something of noble character it will buy me favor in heaven. It is a false notion and I know this. As always, God continues to convict me, never leaving me to my own devices. I know this because my conscience continues to be nudged and pricked by His spirit. My desire is to be in the first group that Paul writes about in Romans 2:6-11. I want to be persistent in seeking glory, honor, and immortality. For the prize in seeking those things is immortality with Christ in the eternal kingdom. Sometimes I am exhausted by this world and its many problems. Only through the grace of God, do I find strength. He is sufficient.