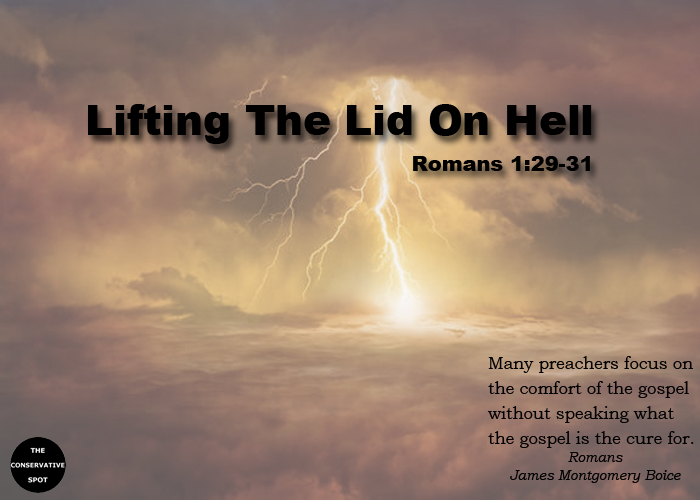 Psychiatrists say that if you scratch the surface and thus penetrate beneath the thin veneer of human culture and respectability, you “lift the lid of hell.”

Study of Romans as given by Dr. James Montgomery Boice: Romans 1:29-31

29They have become filled with every kind of wickedness, evil, greed and depravity. They are full of envy, murder, strife, deceit,and malice. They are gossips, 30slanders, God-haters, insolent, arrogant and boastful; they invent ways of doing evil, they disobey their parents; 31they are senseless, faithless, heartless, ruthless.

Previously we have been looking at the most dreadful description of the sinful human race as given by Paul. It begins with the rejection of God by all people and proceeded to God’s abandonment of us, as a result of which human beings rapidly fall into a horrible pit of depravity, to their own hurt and the hurt of others. We now come to a list of vices as Paul continues his description of human sinfulness against God. It’s a long list of 21 items. How are we to handle such a reflection of ourselves? Some will not face it at all, even many preachers will not face that reflection. These vices are what many theologians call “total depravity” and no one wants to hear about them. Many preachers stay clear of mentioning these vices in order to sanitize their preaching for fear of driving people away. May preachers instead focus on our goodness, the potential for human betterment, the comfort of the gospel—without speaking of that for which the gospel is the cure. Psychiatrists say that if you scratch the surface and thus penetrate beneath the thin veneer of human culture and respectability, you “lift the lid of hell.”

All Kinds of Wickedness

The Road to Hell

21! That’s the number of vices Paul gives us in verses 29-31. These vices, as most theologians refer to them, were Paul’s analysis of his time, and nothing has changed. Those same vices afflicting the human race thousands of years ago are still the vices hammering away at society today. We can look around us and observe the social upheaval taking place and conclude we suffer from overindulgence in these vices. You want to know what the result is of our disobedience toward God, Paul gives us 21 results. The vices is what happens when God gives us up to our own desires. As quoted from Boyce, “We have made earth a hell! And we will carry that hell with us into hell, making hell even more hellish that it is already! We and hell itself will go on becoming more and more hell-like for eternity. Oh, the horror of our choice! Oh, the glory of the gospel!” I would encourage everyone to go through each one of these vices and doing a study of each one. We should ask ourselves two simple questions: 1) How am I guilty of any of these vices? (If you think you aren’t guilty, then run to your prayer spot and ask God to show you how you are guilty.) 2) What can I do to change? I’m going to pick just a couple of these vices and then expand on them. The first vice I want to cover is “Evil Inventors”.

The words used in the NIV is “…they invent ways of doing evil;…”. As Dr. Boice mentions above in the outline, there is only way man outdoes God, and this is in inventing evil. We aren’t happy with doing normal evil, we actually look for new ways to do evil. One of the most heinous acts that man has invented to do evil is through the act of abortion. How depraved must man be to think that ending the life of a child was not evil? The act itself is evil, and then we have taken abortion to a new level of evil. There are those who have lobbied and succeeded in making the act of abortion legal. Truly, only from the mind of Satan, could this come from. Previously we discussed the “depraved mind” as being the mind of Satan, and this is it. Another way man has invented evil is by intentionally taking the Holy Text out of context for the sole purpose of misleading. We see this happening in the progressive/liberal church. We see this when scripture is quoted to prove a point without paying attention to context and the entirety of the Holy Text. The “cherry picking” is used by the unsaved to try and convict the Christian or catch them in a “gotcha” moment. The non-Christian, I include liberal/progressive churches in this group, twist and confuse scripture to deny basic Christian tenets. There are churches who deny the deity of Christ, the virgin birth of Christ, the existence of heaven and hell, the authority of Christ, the authority of God, the wrath of God, and the list could go on. When I think that man has exhausted his mind in the invention of evil, I read the daily news and find that I am mistaken. We excel at this task, and there is no end in sight.

The grouping of gossips, slanders, God-haters, insolent, arrogant, and boastful is about pride. It is the God-haters which is the second area we are going to look at. Robert Haldane in his commentary on Romans say says this about God-haters, “…it is the highest manifestation of pride…” Haldane would go on to write in his Exposition of the Epistle to the Romans, “The carnal mind is enmity against God. They hate His holiness, His justice, His sovereignty, and even His mercy in the way in which it is vouchsafed.” There is not a single person past, present, or future who naturally loves God. We all run away from God. Only by the work of the Holy Spirit are we drawn to God, and this is done only because of the mercy and grace of God. Those who pursue a disobedient life to God do so because there is a natural tendency to hate God. When we look at the world and come face to face with agnosticism, atheism, false idols, disobedience to God, we should do so with the understanding of the existence of the natural hate for God. What is the source of this hate? The desire to be autonomous is that source, which takes us all the way back to Adam and Eve. We hate God because we don’t want to live under the authority of God, we want the autonomy to do as we please. This desire to be autonomous fuels the hate for God, because we want to derive our own set of ethics. We don’t want our ethics to be set by God because it limits we want to do as we please, and that is to fulfill the appetites of the sinful nature.

How does our hate of God tie in with inventors of evil? In order to try and erase any sense of God in our lives, we have to numb, even kill, the conscience that speaks to us. In order to desensitize the conscience we commit acts of evil, inventing new acts of evil even. Once we start down this path God will hand us over to our desires. God in essence gives us up to our sinful desire, no longer constraining out hearts. The completely unconstrained heart is capable of unspeakable acts of horror. We’ve seen a few of these people throughout history; Hitler, Stalin, ISIS, Pol Pot, etc. We can certainly place those who vocally support and lobby for abortion in this list as over 50 million, now approaching 60 million, children have died needlessly. The agenda to redefine marriage and sexual identity is another way we show hate for God. We cannot separate hate for God from inventing new ways to commit acts of evil. Our hate for God is manifested through the evil we commit.