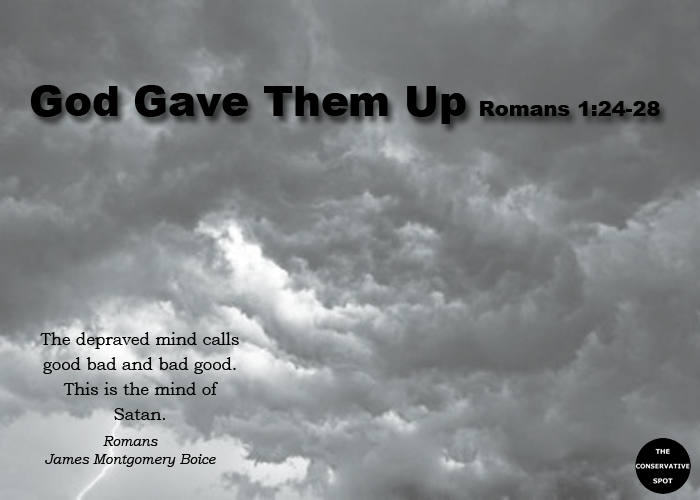 Study of Romans as given by Dr. James Montgomery Boice: Romans 1:24-28

24Therefore God gave them over in the sinful desires of their hearts to sexual impurity for the degrading of their bodies with one another. 25They exchanged the truth of God for a lie, and worshiped and served created things rather than the creator-who is forever praised. Amen. 26Because of this, God gave them over to shameful lusts. Even their women exchanged natural relations for unnatural ones. 27In the same way the men also abandoned natural relations with women and were inflamed with lust for one another. Men committed indecents acts with other men, and received in themselves the due penalty for their perversion. 28Futhermore, since they did not think it worthwhile to retain the knowledge of God, he gave them over to a depraved mind, to do what ought not to be done.

Dr. Boyce gives us a short summary of what we have learned so far in what mankind has done to deserve God’s wrath. Dr. Boyce lists three actions that we have done to deserve His wrath: (1) suppressed the truth about God; (2) refused to glorify, or worship, God as God; and (3) declined to be thankful. Because of our actions we have become “darkened” in our thinking, we have become fools. Up to this point we have not been told how God is showing His wrath against mankind, but that is about to change. What we find in verses 24-28 is God, and we are told this three times, abandoning men and women to their perversion. We read in 24, 26, and 28 that “God gave them over”. Man’s punishment for their perversion is to be abandoned by God, to be left alone. The irony is this is what mankind wants, to be left alone so they can pursue their own desires. “Like the father of the Prodigal Son, he releases the rebellious child, permitting him to depart with all his many possession and goods for the far country.”

In Genesis 3:4-5 we read 4“You will not surely die,” the serpent said to the woman. 5”For God knows that when you eat of it your eyes will be opened, and you will be like God, knowing good and evil.” Here’s the catch though, Adam and Eve were already “like God”. Previously in Genesis 1:26-27 we read “26Then God said, ‘Let us make man in our image, in our likeness, and let them rule over the fish of the sea and the birds of the air, over the livestock, over all the earth, and over all the creatures that move along the ground. 27So God created man in his own image, in the image of God he created him; male and female he created them.” Let me clear something up at this point. While man was created in the “likeness” of God, man was not created equal with God. The word “likeness” means that man was created with a set of ethics, man was worthy of honor as the ultimate creation of God. Satan wasn’t really offering a way for Adam and Eve to be like God. Satan was tricking Adam and Eve to be like him, and Satan succeeded. I start with Genesis, because it has a direct bearing on the phrase “depraved mind”. A “depraved mind” is what Satan wanted to form in Adam and Eve when he tempted them. The moment Adam fell that was the moment all of mankind fell, it was the moment God would begin to give us over to our sinful desires. It was the moment when we would feed the appetites of the flesh over the feeding our need to depend on God. In replacing God with our own desires, our own autonomy, we moved away from the knowledge and wisdom of God to the depraved mind of Satan. While Paul talks about the unnatural sexual acts that men do with other men and the same goes for women, I’d like to look at another unnatural act. That unnatural act would be abortion.

Abortion, since its legalization in the early 1970’s, has taken more than 55 million innocent lives. Abortion doesn’t care about race or gender. Abortion is the taking of innocent human life and I don’t think an argument can be made to say otherwise. Even if we fall into the trap of using the language of those who support abortion and call a fetus a clump of cells, it is still a human clump of cells. I could go through all the arguments used by those who support abortion and refute each one of them, but Daniel Payne in his article Here’s A Primer on Pro-Life Responses to Common Counter-Arguments has already done that. What we should take away from this lesson is that there is nothing natural about taking innocent life. Abortion is a violent act towards the very definition of life. It is a consensus that what forms in the womb is life, not just any life, but human life. What is developing in the womb, while in a different stage of development, is still widely considered human life. What the argument is really about, on the surface, is “does an individual have the right to choose to end another life that is developing?” It’s about autonomy. Much like Adam and Eve had a desire for autonomy, so today supporters of abortion want autonomy, for that matter all of mankind wants autonomy from God. Where has this intense desire for autonomy lead mankind? It has lead us to the formation of a depraved mind.

In the outline above Dr. Boyce gives a precise picture of what a depraved mind is. Simply put, it is having the mind of Satan. The depraved mind calls what is good, bad. Is this not the description of those who support, promote, and perform abortion? In our desire to have autonomy apart from God, we take to destroying His creation, life. God is the creator of life, so what better way to show indignation toward God than taking innocent life before he/she has even had the chance to experience life. What makes abortion even worse is that those who support abortion are so depraved in their thinking that they will not listen to reason. Those who support abortion are so intent on the destruction of life, so depraved in their thinking, that they are a hopeless case to convince otherwise. Thanks be to a patient, kind, and long suffering God. Even the most hopeless case has hope.