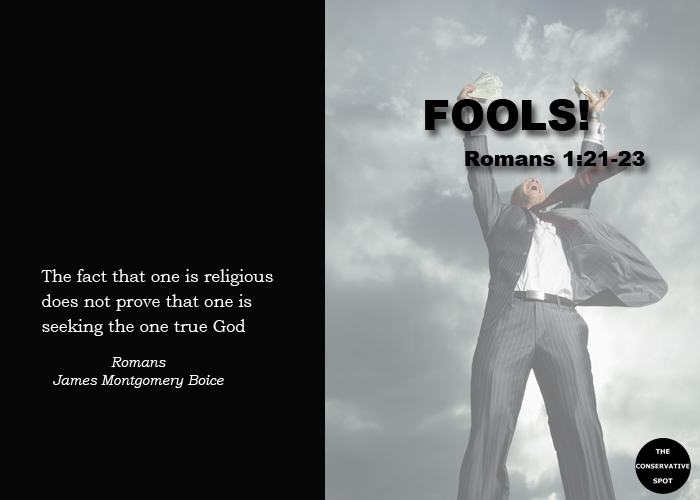 A marriage, a family, any relationship, cannot withstand the appetite that a false idol will produce in the person chasing after the idol.

Study of Romans as given by Dr. James Montgomery Boice: Romans 1:21-23

For although they knew God, they neither glorified him as God nor gave thanks to him, but their thinking became futile and their foolish hearts were darkened. Although they claimed to be wise, they became fools and exchanged the glory of the immortal God for images made to look like mortal man and birds and animals and reptiles.

Fools. That’s a harsh indictment of the human species from Dr. Boice, but none the less it is true. It’s not true because Dr. Boice says it is true. It is true because scripture says it is true. Looking all the way back to the events which unfolded with Adam and Eve, Dr. Boice makes the argument that Adam was deliberate in his sin. Adam was not deceived by Satan, like Eve was. Adam knew that he was rebelling against God and the he was rejecting God’s truth about himself and the world. What Adam wanted was to build his own truth. Adam wanted to follow his own created truth. This is what Satan really offered Eve. Satan offered Eve a chance to create truth for herself. You see, Adam and Even already knew right from wrong as they were both created in God’s image. Being created in God’s image already gave them a set of ethics, a sense of right and wrong. What Adam and Eve wanted was an ability to say what is right and wrong, they wanted autonomy in creating their own set of ethics. Adam wanted to make his own rules. In Adam’s attempt to become sovereign, Adam rebelled and Adam became anything but sovereign. Instead of become like God as Satan promised, Adam became more like Satan. Instead of rewriting the truth so that it would better suit his own warped desires, Adam began a process in which he and the human race after him turned from the truth of God to lies.

From Darkness to Light

Idols. We all have one or more idol. I’m not talking about the kind you have as a teenager growing up and made your heart race just a little faster. The kind of idol I’m talking about is the kind that affects the way we see life. We all have developed an ideology about life, it’s the philosophy that guides us in our decisions. It’s the philosophy that also shapes our views on other people and how to treat those people. We develop relationships, marriage, friends, etc., and how ideology determines how we view those relationships, how we behave in those relationships. So it’s kind of important to understand our world view and how that view affects everything we do in life. That world view is partially formed by the idols we have set up for ourselves. The thing you spend the majority of your life seeking after, is the idol you have created in your life.

If money is the one thing you spend the majority of your life trying to attain, and you do it at all costs, then money is your idol. Money will determine the type of relationships you have, the way you treat people, the way you behave in general. The same can be said of sex, fame, power, persona, etc. Our entire identity is enmeshed with our idol as it defines who we are. When our idol is present then we have to go out and seek, we have to have our idol because if we don’t have it then we lose our own self-concept. We don’t know who we are. We don’t know our purpose in life apart from our idol.

When Paul writes in Romans 1:21-23 about becoming fools and exchanging the glory of God for images he is talking about doing this very thing. It is utter foolishness to chase after and idolize things that last only a fleeting second. We exchange the permanence of God’s glory for the temporary euphoria we get when we take the action of worshipping our false idol. I have seen drug addicts do just about anything to obtain their idol. I have seen sex addicts use people, not caring about the aftermath of their actions. I have seen families fall apart because one person idolizes money and works hours upon hours to obtain it. A marriage, a family, any relationship, cannot withstand the appetite that a false idol will produce in the person chasing after the idol.

The call coming from Paul is to not be fools in life. Take a few minutes and do a word study on the word “fool”. You’ll find that, in this context, it’s a very strong condemnation of the person who exchanges God’s glory for idols. The Greek word basically says you are moronic, but you are also a person guilty of moral folly or wickedness as well. This idea of setting up false idols indicts one of being wrong in their set of ethics as well as being evil. There is no easier way to convey this message, but we who are idol chasers are moronic in our chase. Because we are moronic in our chase, our thinking has no meaning, no substance to guide is correctly in life. Again, who can save us from ourselves, but only the grace and mercy of God.