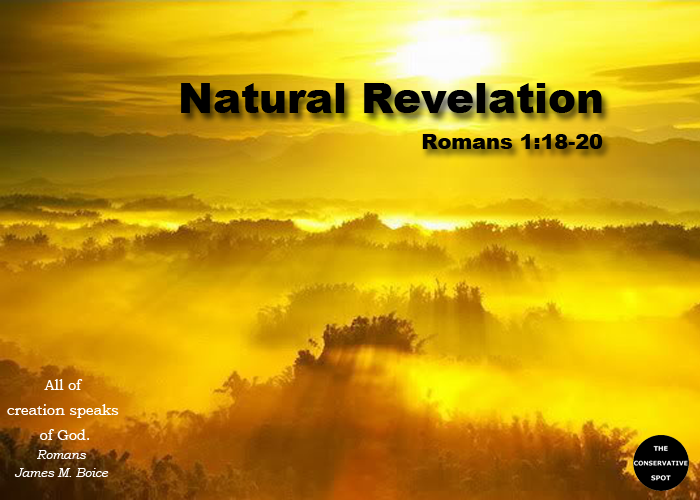 All creation, all knowledge, all science, all history, everything past and present speaks to the existence of God.

Study of Romans as given by Dr. James Montgomery Boice: Romans 1:18-20

18The wrath of God is being revealed from heaven against all the godlessness and wickedness of men who suppress the truth by their wickedness,19since what may be known about God is plain to them, because God has made it plain to them.20For since the creation of the world God’s invisible qualities-his eternal power and divine nature-have been clearly seen, being understood from what has been made, so that men are without excuse.

We never like to talk about the “wrath” of God, but when we do we usually find ourselves reacting in one of two ways. Either (1) we argue that “wrath” is unworthy of God. “Wrath” is a blotch on God’s character. “Wrath” is a notion that should be abandoned by all people in their right mind; or (2) we try to justify ourselves and justify us not meriting God’s “wrath”. It is the second reaction that is the worse of the two and is the one Paul tackles in his argument for why we all have need of the gospel. Romans 1:18-20 contains three important concepts, which together explain why the wrath of God against men and women is justified: (1) Wrath itself is being revealed from heaven against the ungodly (2) men are suppressing the truth about God and (3) God has given prior revelation of himself to all people, even those who suppress the truth. These things need to be studied in reverse order; revelation, suppression and wrath. These three concepts teach that God has given revelation of himself through his creation, but men and women suppress this revelation. This revelation is suppressed so that they do not have to follow where it leads them. Because of this willful suppression of truth God’s wrath is being/will be poured out on them.

Every morning I get up and go through the same routine of getting ready for work. I walk out the door and take the same route to work using public transportation. I enter the building I work in and take the elevator up to the 5th floor where my office is. I don’t really think about it because it has become second nature for me. I don’t think about the world around me as I’ve insulated myself in a world of 1’s and 0’s as a software developer. Except now as I reflect upon this lesson covering natural revelation it is forcing me to take a different look at the world and my surroundings. I notice other people and ponder about what their lives are like. I think about the world and everything in it. My head begins to hurt when I think about the universe and everything that’s needed to keep it running with precision. From the 1’s and 0’s I deal with daily to the expanse of the universe and everything in between I see the evidence and wonder of God. All creation, all knowledge, all science, all history, everything past and present speaks to the existence of God. Henry Morris, Ph.D. did the mathematical work for the probability for evolution to work. The probability of a 200 part system evolving by chance alone is 1 out of 10^60, that’s a ten with 60 zeros behind it. That’s a mahoosive number! The truth also remains that not a piece of scientific evidence will cause people to turn their heart toward God. Science and the world we live in speak loudly to the existence of God and none of it will persuade any man, woman, or child to believe in God. The human race would rather suppress the truth of God, trade the truth in for a lie. It is a lie that attempts to dissuade ourselves from accepting the existence of God, but God will not accept that as an excuse in the end. There will be no excuse for man not to believe in God when proof of his existence is all around us. Even though natural revelation is not a revelation that will bring us to a knowledge of Christ and his righteousness, it is a revelation nevertheless that should cause us to seek out God. The belief of the existence of God as seen through natural revelation is a 1 or a 0 to me. Either you see it and know that there is a God or you suppress this evidence and reject the idea of God’s existence. It’s my hope that we open our eyes to absorb what God has created followed by opening our hearts to accept what God is speaking to us through his creation and be blessed with supernatural revelation.