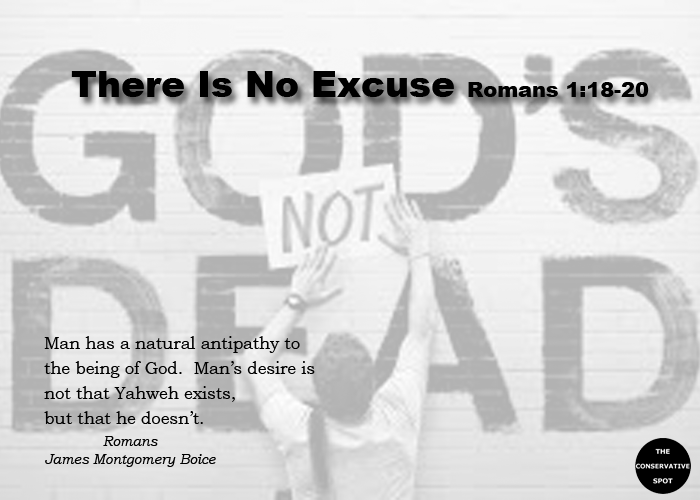 “Man’s desire is not that Yahweh exists, but that he doesn’t.”

Study of Romans as given by Dr. James Montgomery Boice: Romans 1:18-20

18The wrath of God is being revealed from heaven against all the godlessness and wickedness of men who suppress the truth by their wickedness,19since what may be known about God is plain to them, because God has made it plain to them.20For since the creation of the world God’s invisible qualities-his eternal power and divine nature-have been clearly seen, being understood from what has been made, so that men are without excuse.

Dr. Boice opens this topic up by going to a great source which is R.C. Sproul’s book titled “If There Is a God, Why Are There Atheists?”. This is a short title to read, but in a short 147 pages Sproul lays out the religion of atheism and the purpose of atheism. It is a work trying to answer why people become atheists. Sproul makes a distinction between two types of atheists, philosophical atheists and practical atheists. Practical atheists may confess a belief in God, but live as if there is no God. Philosophical atheists believe there is no God and try to argue against the existence of God based on intellectual arguments. Sproul will make the case that atheism “has nothing to do with man’s supposed ignorance of God–since all people know God, according to Romans 1–but rather with mankind’s dislike of him. People do not “know” God, because they do not want to know him”. As Sproul sees it, there isn’t enough evidence to convince people that there is a God. The problem is that people have a natural antipathy or hatred toward God. “Man’s desire is not that Yahweh exists, but that he doesn’t.”

When I first saw R.C. Sproul’s book “If There Is A God, Why Are There Atheists?”, I thought what an odd title for a book. As I thought about more and more I began to realize that this is an appropriate title, and question to ask. If God is sovereign, why does He even allow Atheists to exist. Why does God suffer those who deny His existence. I think there are a couple of reasons why God tolerates such behavior. First the obvious, so that his grace and mercy would abound even more. As we will study in a future look at Romans, God is long suffering. He is tolerant to a certain degree. He allows atheists to be atheists so that even to them he shows his mercy and grace. He shows this by allowing such behavior to exist. When an atheist does come to know Christ, God’s mercy and grace comes to fruition. You see, God’s mercy and grace never is returned empty. It is an example that his people should follow. Treat others with mercy and grace so that we give a glimpse of God. Which brings me to my second reason why God tolerates atheism. As believers in Christ, living a life of faith, we are held to the great commission given in Acts. We are to be emissaries of Christ, ambassadors and deliverers of the Gospel. God tolerates the unrighteous so that those that live by faith, you and me, can fulfill that great commission of being witnesses to them. Our most effective tool for fulfilling that commission is how we live our lives in front of them. We are called to be righteous so that the unrighteous will catch a glimpse of the holiness of God.

God tolerates, even allows the existence of, unrighteousness/atheism so that his patience and kindness can be on display. There is an appointed day though, when that patience and kindness will run out. There is an appointed day when God will no longer suffer the unrighteous, but instead will pour out the wrath that has been stored up, that’s for another study though. Don’t stand as an unjust person, before a just God.