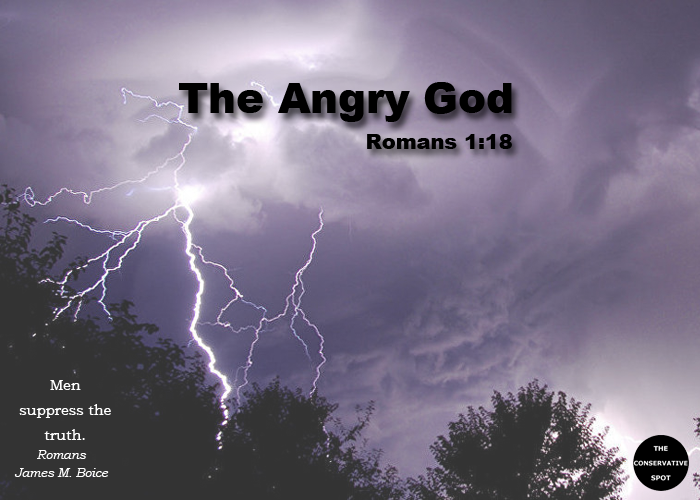 Today’s preaching is deficient at many points. But there is no point at which it is more evidently inadequate and even explicitly contrary to the teachings of the New Testament than in its neglect of “the wrath of God.”

Study of Romans as given by Dr. James Montgomery Boice: Romans 1:18

The wrath of God is being revealed from heaven against all the godlessness and wickedness of men who suppress the truth by their wickedness.

Wrath as defined by Websters; (1) strong vengeful anger (2) retributory punishment for an offense or a crime : divine chastisement. I think it’s safe to say that a number of people, possibly even a majority, do not want to accept this attribute of God. “How could a loving God be one full of wrath?”, they ask themselves. “My god is a loving god”, some say. While God is a truly benevolent and merciful God we, specifically Christians, cannot and should not deny that God is also a God of wrath and all of the Holy Text supports this attribute of God. While God is also a God of wrath, we must remind ourselves that wrath is not the only attribute at work in God. When we speak of the Wrath of God we must also speak of all the other attributes of God, at work in unison with one another. In other words when we see wrath from God, we also see love, justice, mercy, decree, foreknowledge, etc. all working together and in perfect unison. We cannot separate one single attribute and say that God is just showing this attribute, all attributes are there and all are working together. I want everyone to understand this point because so many times we want to focus on one attribute and neglect the other attributes as if they do not exist which leaves God one dimensional in his dealings with his created people. If we do not see God as he truly is, with all his attributes, then we will shape God into what we think he should be and soon begin to move ourselves into a higher position than God.

Selections from “The Attributes of God” by Arthur W. Pink on the attribute of The Wrath of God

I highly recommend that you find a copy of Pink’s “The Attributes of God” and read it in its entirety. I want to make another point very clear. The Holy Text speaks more about God’s wrath then it does about his tenderness and mercy. This does not mean that we should elevate one attribute over the other. It is because of God’s mercy and tenderness that his wrath is present also. One attribute cannot be present without the other attributes, something I myself find hard to wrap my mind around. I would encourage you to do a study on the attributes of God, either individually or as a group, and begin to see how these characteristics of God work together for the good of those who believe in God and submitted their will to God’s will.