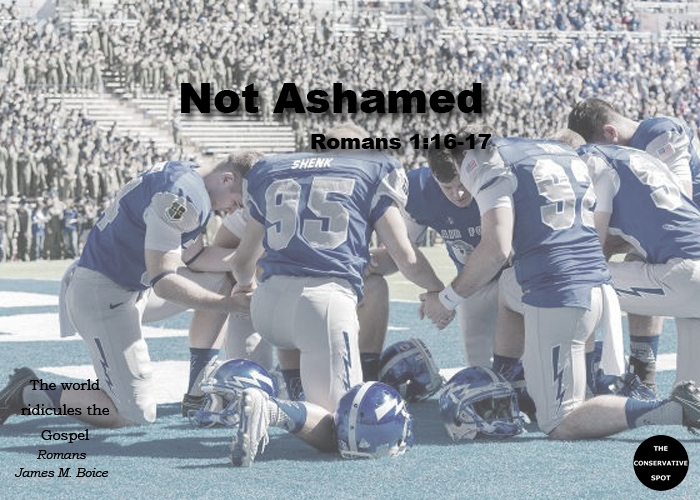 Study of Romans as given by Dr. James Montgomery Boice: Romans 1:16-17


I am not ashamed of the gospel, because it is the power of God for the salvation of everyone who believes: first for the Jew, then for the Gentile. For in the gospel a righteousness from God is revealed, a righteousness that is by faith from first to last, just as it is written: “The righteous will live by faith.”

It is an odd thing for Paul to say that he is “not ashamed” of the gospel. Who would even consider a thing. Questions like this though are not very deep or honest, since we all have been ashamed of the gospel at one time or another. The reason for this shame is because the world is opposed to the Gospel and we are more attuned to the world then we are to God. Robert Haldane writes:

Is the situation any different today? While there may seem to be a great deal of tolerance for the Christian, we may find that to be a fleeting view, here only for a short time. What is presented below are eight reasons to not be ashamed of the gospel.

Why would anyone ever be ashamed of the gospel, if it is such good news to the world? I think it comes down to this one premise, we are more concerned about what the world thinks than what God thinks. As adults we make think this has something to do with peer pressure and adolescence, but its not just contained to that age group. Even as adults we become timid around certain people, or group of people. As adults we are still influenced by the world around us and given the right environment we will begin to do things we normally would not do, say things we normally would not say, all in attempt to fit in. Adults who are not secure in their relationship with God and secure in who they are will work just as hard as any adolescent to fit in with the “right” crowd. I don’t speak from a distance, but I speak from someone who struggles with the same problems close up. I often find myself doing and saying things I know are not pleasing to God. I also often find myself living with remorse for words and actions I know I should distance myself from. I know how damaged my testimony to the world is by the very actions I commit in an attempt to be liked and to fit in. Its a struggle and as much as I don’t want to participate in these actions I find myself doing what I should not do. I’m always reminded of this section of text from Paul:

When we bend to our own will and we change our principles to obtain the approval of others we show a shame for the gospel that distances us from God. We cannot and should not expect growth in closeness to God if we continually live our lives this way. Continually looking for that approval from others will be the same as tying a boulder around our necks and sinking to the bottom of the ocean. That search for approval from others, being ashamed of the gospel, will distance us from God and we will suffer the consequences of that distance. We should not be ashamed of the gospel and it should be evident in every moment of our lives.