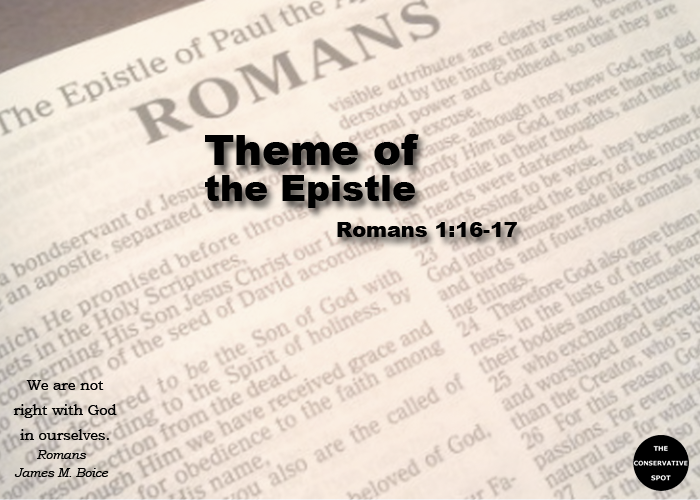 Study of Romans as given by Dr. James Montgomery Boice: Romans 1:16-17


I am not ashamed of the gospel, because it is the power of God for the salvation of everyone who believes: first for the Jew, then for the Gentile. For in the gospel a righteousness from God is revealed, a righteousness that is by faith from first to last, just as it is written: “The righteous will live by faith.”

In these verses we come to what is probably the most important sentences of the entire text of God’s word and probably in all of literature. They are the theme of the epistle and the essence of Christianity. These two sentences are the heart of biblical religion. Why is so much weight given to these two sentences? They tell us how to be right with God. Not a single one of us is right with God and is the essence of the doctrine of original sin. We are in rebellion against God and since we are in rebellion we cannot be right with God. What can be done to remedy this? On our own we can do nothing to rectify this problem. God has provided a way, He has provided a righteousness and its that righteousness which is the only way to find a right relationship with God. This righteousness is not earned by doing righteous things, but by simple faith.

Righteousness isn’t something we can purchase with money and its not something we can earn through good deeds. There is nothing we can do to earn righteousness because its something that is freely given away for those who come to know Christ. From time to time I have to remind myself of this simple fact. It’s very easy for me to convince myself that I’ve done enough good in this life to earn righteousness. I’ve tried treating people fairly, feeding the hungry when I could, listening to people when they are sad, giving to the church when it was convenient, etc. You know, doing all the normal things Christians believe they can do to earn righteousness. Just when I think I’ve done enough I read something like this and am reminded that I am woefully wrong. Righteousness is imputed, more on that word later, to us by the work of Christ on the cross. Just as man imputed all of our sin on Christ at the cross and Adam imputed sin to all the righteousness of Christ is imputed to all those who know him. This is a truth that every single Christian should have branded on their heart as it is a foundational belief of Christianity and one of the major points that defines Christianity. What does the word “impute” mean? Simple definition involves the idea of taking from one’s account and placing what was taken into anothers account. The formal definition of “impute” according to Merriam-Webster is; to credit to a person or a cause. Adam’s sin was credited to all men just as Christ’s righteousness was credit to all those who know him. When we hear that God imputed the sin of man onto the Christ, it means that even though we are guilty of sin against God, God takes that sin and credits it to Christ. Christ now owns that sin, it is in Christ’s account. In the same fashion God credited to all believers the righteousness of Christ and so when God looks at those who know Him, he sees them as if they were just as righteous as Christ. God now looks at those who place their hope in Christ through the lens of Christ, and in Christ we are made righteous and holy.