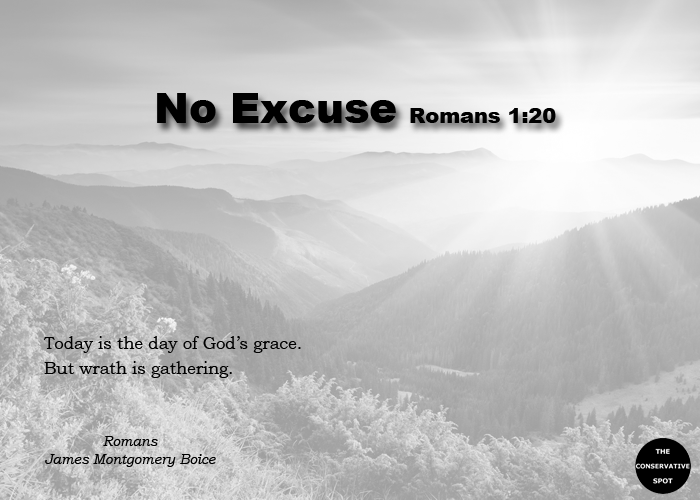 Study of Romans as given by Dr. James Montgomery Boice: Romans 1:20

For since the creation of the world God’s invisible qualities”his eternal power and divine nature”have been clearly seen, being understood from what has been made, so that men are without excuse.

As much as we would like to think that we are invincible and infinite, we aren’t’. Only God is infinite. What we do have is an infinite number of excuses for our behavior. We can come up with an excuse for just about anything we do or say so that the blame doesn’t rest on our shoulders. We don’t like to take the blame for what happens in our lives. Why should we when we can use excuses like “It wasn’t my fault,” “Nobody told me,” “My intentions were good,” “you shouldn’t be so critial,” and on and on and on. Some people just give up and quit trying to come up with excuses, they feel they no longer need them or to explain their actions. This is an attitude of being too great to need to make apologies. Our text says that in spite of our almost infinite capacity to make excuses, we are all “without excuse” for our failure to seek out, worship, and thank the living God.

“I Have Too Many Questions”

“I Didn’t Think It Was Important”

I have a a very good friend, I’d consider him one of my best friends, who is pretty agnostic about the existence of God. We do have discussions, but my friend is pretty stubborn. I think his hardest obsticale to overcome about believing in the existence of God is the evil that is in this world. Yes, that would be one of the top excuses mentioned in the study of Romans 1:20. I don’t think he can accept the reasons given many times for evil. Even I have a hard time reconciling a good and benevolent God with evil, but I have to accept by faith that God is sovereign over all. In his article Answering Evil R.C. Sproul still struggles with trying to find an answer for Evil. He writes:

In the many years I’ve taught philosophy, apologetics, and theology, and in the many conversations I’ve had with hurting people, a full answer to the problem of evil remains elusive. If anything, recent events make the problem seem more acute. In the past year alone, we’ve dealt with terrorists bombing the Boston Marathon as well as the Sandy Hook Elementary School shooting in Connecticut. Hurricane Sandy killed nearly 300 people in the Northeastern United States. We could also mention the hundreds of thousands who died in tsunamis in 2004 and 2011. The list is almost endless.

Putting a human face on evil can make it more understandable—it’s no surprise that evil people do evil things. Nature’s violence can be more troubling. How do we deal with natural disasters that do not respect persons but rather indiscriminately claim the lives of the elderly, infants, and the handicapped along with able-bodied children and adults? “How,” many people—even many Christians—ask, “could a good God allow such things to happen?”

If a gifted theologian like R.C. Sproul struggles with this issue, how much more does the regual layman struggle with it. I see my friends point of view and I wish i definitive answer for him, but I don’t. I can say that God allows evil so that his grace and mercy can abound even more, but why even let evil exist in the first place? Why did God allow Adam and Eve fall by being deceived by the serpent? We know God to be omnipotent and omniscienct. God is sovereign. Maybe that’s the thing God wants to continually remind us of. If evil did not exist would we still know about God’s sovereignty? I don’t know. If sin and evil did not exist would we understand God’s mercy and grace? I do not know. What I do know is that evil does exist and satan cannot do anything without first receiving permission from God. Read Job and this fact of permission from God will become clear.