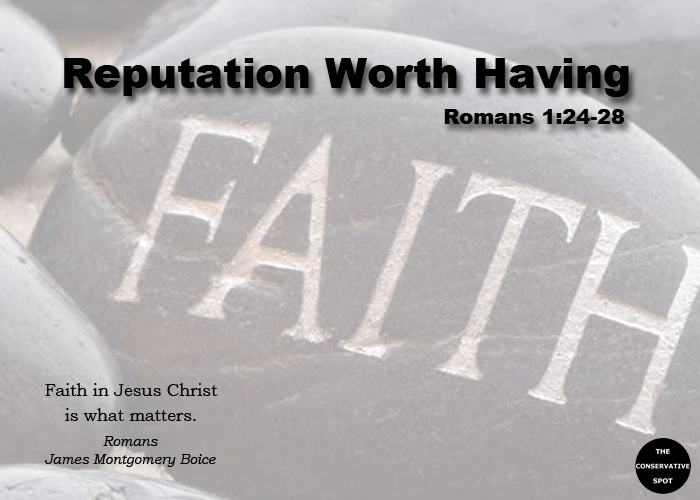 Study of Romans as given by Dr. James Montgomery Boice: Romans 1:8

8First, I thank God through Jesus Christ for all of you, because your faith is being reported all over the world

“8But you will receive power when the Holy Spirit comes on you; and you will be my witnesses to Jerusalem, and in all Judea and Samaria, and to the ends of the earth.” (Acts 1:8). I start with this verse because I believe it develops a connection between Acts 2 and the early church in Rome. These were the words of Christ after his resurrection and he was meeting with some men, mainly apostles. What Christ gave in these words were not a request or a plea, it was a command. When we jump to Acts we read about the day of Pentecost and who were there on that day. In verse 10 of chapter 2 we find that there “…visitors from Rome” there. We covered this in the outline above, but I bring it up to make this point. When Christ gave the command to witnesses to the ends of the earth, the visitors from Rome, who were probably not there when Christ spoke those words, knew instinctively that this was something that needed to be done. There is strong evidence that it could have been these visitors from Rome who started the Christian church in Rome. I believe these visitors were also baptized and were part of the “…three thousand added to their number that day.” (Acts 2:41). These visitors from Rome were also in the group, I believe, that were part of the fellowship of believers who stuck around and witnessed the miraculous signs, broke bread, prayed after the day of Pentecost. We are not told how long this went on, but, eventually the visitors from Rome returned to Rome and it was at this time they founded the church.

Faith: (Greek – pistis; latin – fides, “trust” or “belief”) In Christianity, belief, trust, and obedience to God as revealed in Jesus Christ. It is the means of salvation (Eph. 2:8-9) or eternal life (John 6:40). Faith affects all dimensions of one’s existence: intellect, emotions, and will. (McKim, Westminster Dictionary of Theological Terms, p. 100)

“Faith is the attitude whereby a man abandons all reliance in his own efforts to obtain salvation, be they deeds of piety, or ethical goodness or anything else. It is the attitude of complete trust in Christ, of reliance on him alone for all that salvation means.” (Tyndale, New Bible Dictionary, p. 366 – 367)

I keep reading the above definitions over and over. Not to memorize them, but to comprehend what faith means, what faith is. I find myself coming back to Hebrews 11:1-2, “Now faith is the substance of things hoped for, the evidence of things not seen. This is what the ancients were commended for.” I have always struggled with what real faith looks like. I’m sure I’ve seen it at times. There was my mother, a women of deep faith who trusted God in all times, good or bad. I think of my friend David, who rests solely on the work of Christ for salvation. I think of King David, Abraham, Job, Luther, Calvin, the Disciples, Paul, the list could go on forever. All those men who I have read and studied, men of faith who trusted God for salvation. All these people knew that salvation came not from within themselves, but from God showing grace to his people and God calling them to salvation and providing his son, Jesus Christ, as the avenue for that salvation. As much as I have witnessed faith in action, I know that I have failed many times at living a life of faith.

I am sometimes embarrassed at my weakness, at times complete lack of faith. When I talk about being weak in faith, for me, I mean I don’t always trust God to take care of my future. I have, for the better part of my life, believed that my salvation rests in the work of Jesus Christ. I have come to gladly embrace the truth that it was God who called me to salvation, and that I had no part in the act of salvation. While understanding the previous two points is a large part of what faith is, faith is more than this. Faith also includes a daily trust in God for all things needed, and knowing that God is sovereign. I fail miserably at the first part, and it is fear that holds me back from trusting daily in God for all things. Fear of what might happen if you put all trust in God, is a faith killer. I do not count myself yet at the point of putting complete trust in God for daily living, as a result I believe it hinders my ability to minister to others, to live a life as full as God would want me to live, to be a living testimony to the life changing power of a gracious God who loves me. I guess the next hard question to answer is why? The answer to “why” will be saved for another time.

Faith is a gift from God and is strengthened through daily prayer and study of God’s word. When I say “study”, I don’t mean casual reading of the text. Study means actively digesting God’s word through memorization, meditation, and prayer over God’s word. Prayer that God would open the mind to the lessons of his holy text, to comprehend it, to open our hearts so that the Holy Spirit can infiltrate the heart and mind. If we can get to this point then we begin to understand the awesome things God did and become a living witness to the faith of those who have gone before us. Our faith is strengthened by reading how God interacted with those others who lived a life of faith. Read the entirety of the holy text and focus on the faith of those you read about. Read the great examples of faith in Hebrews 11. Read about the New Testament writers and the faith they lived daily, even unto death. Read about the early church fathers, and the reformers. Read about men of faith who gave their lives to preach the word of God, and they did so fearlessly.

Here is what I do know, the stronger your faith, the more fearless you are when talking about the gospel. A week faith makes you feel ashamed of the gospel and holds you back from talking about the gospel to those who need to hear the good news. I know, because at times I don’t live the gospel because sometimes I feel that shame. I shouldn’t, but it is what weak faith produces. A strong faith releases you from the worries of this world so that you can be about the business of the one true God who has called you to salvation. A strong faith is a visible faith and I refer back to the Westminster Dictionary of Theological Terms, “Faith affects all dimensions of one’s existence: intellect, emotions, and will.” You cannot separate faith from you daily life. A strong faith will seep into everything you do in life, what you say, what you think. This is the type of faith Paul talks about in Romans 1:8. A strong faith is genuine, it is contagious, it encourages other, and it is the central theme of your life.